When I went to the archives on Tuesday, I found a course catalogue from 1912 with the overview of credits needed for a young woman to get a teaching degree at Keene Normal School: 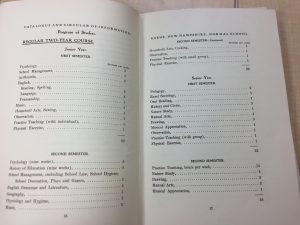 Requirements to Become a Teacher: 1912

Among the course requirements were to be expected: pedagogy (the methods of teaching), school law, and sociology. However, this overview also included courses under the heading of “Household Arts.” These courses covered cooking and sewing. Most of the women attending this institution were straight out of high school, likely unmarried, so they needed an education in how to manage a household after they married and ended their teaching career.

Fifty years later, when Keene became a Teacher’s College, women were still attending the institution to become teachers (even though men were now attending as well). In the 1964 course catalogue, there were more degrees with specifications in subject matter. One of these degrees was in Home Economics. 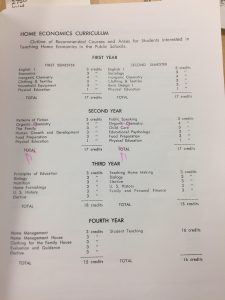 This degree program included student teaching, sociology, and principles of education. It also included classes towards the required skills needed of a female “Baby Boomer,” such as interior decorating and the operation of household machinery. My maternal grandmother graduated with a degree in Home Economics from Keene State College in 1968–and she had my mother a month after her Commencement.

One hundred years after the first course catalogue I found, Keene State College offered a Bachelor’s of Arts in Women and Gender Studies. This liberal arts degree is a stark transition from the Home Economics degree. 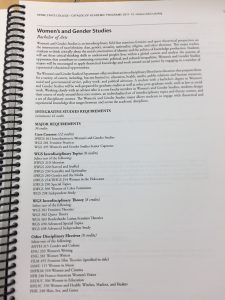 The BA in Women and Gender Studies in 2011: one of its first years as a four-year degree program.

According to the Keene State website, Women and Gender Studies focuses on “the social origins and related politics of identity.” A student at Keene State is also eligible to add this major to his or her education degree.

These three degrees, each offered fifty years apart, show both transitions in education and a woman’s role in society. I’m very interested in studying the intersections of gender and education and how it relates to this college. This project is going to focus on stories which made Keene State what it is today, and women play an integral role in that.

This work is licensed under a Creative Commons Attribution 4.0 International License.